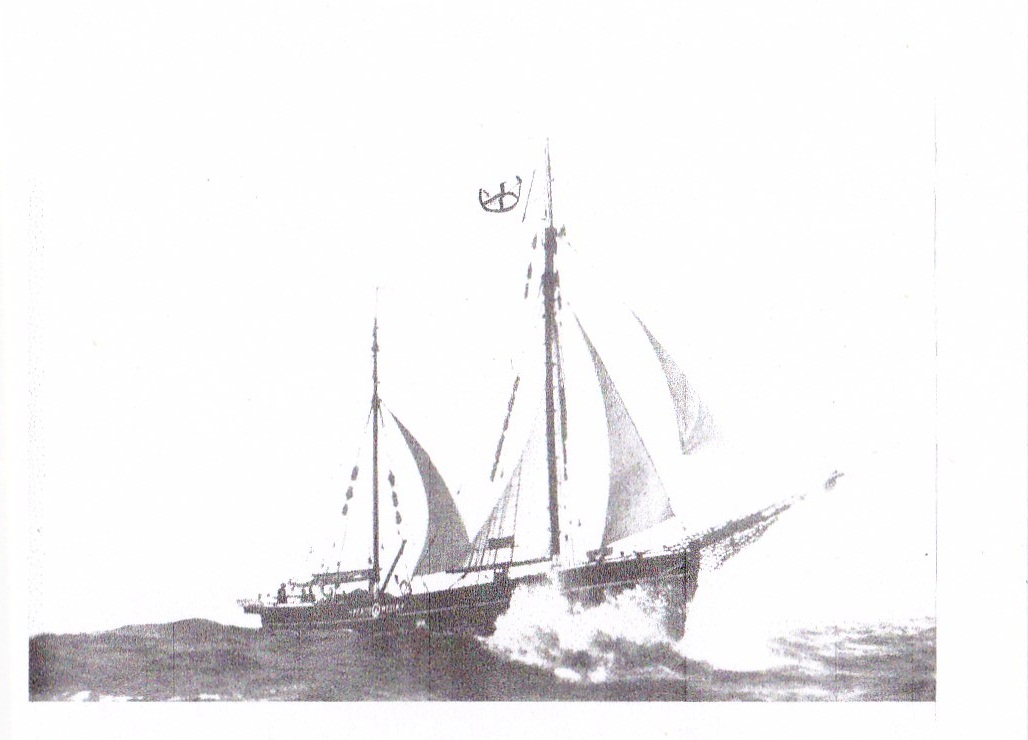 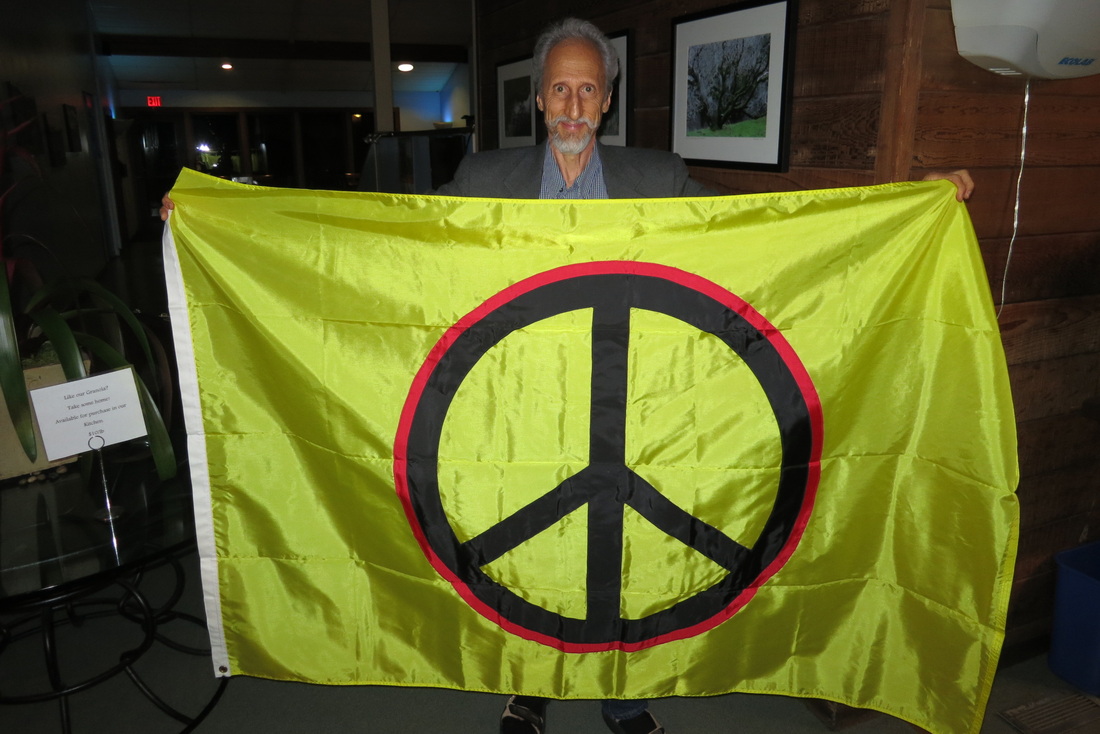 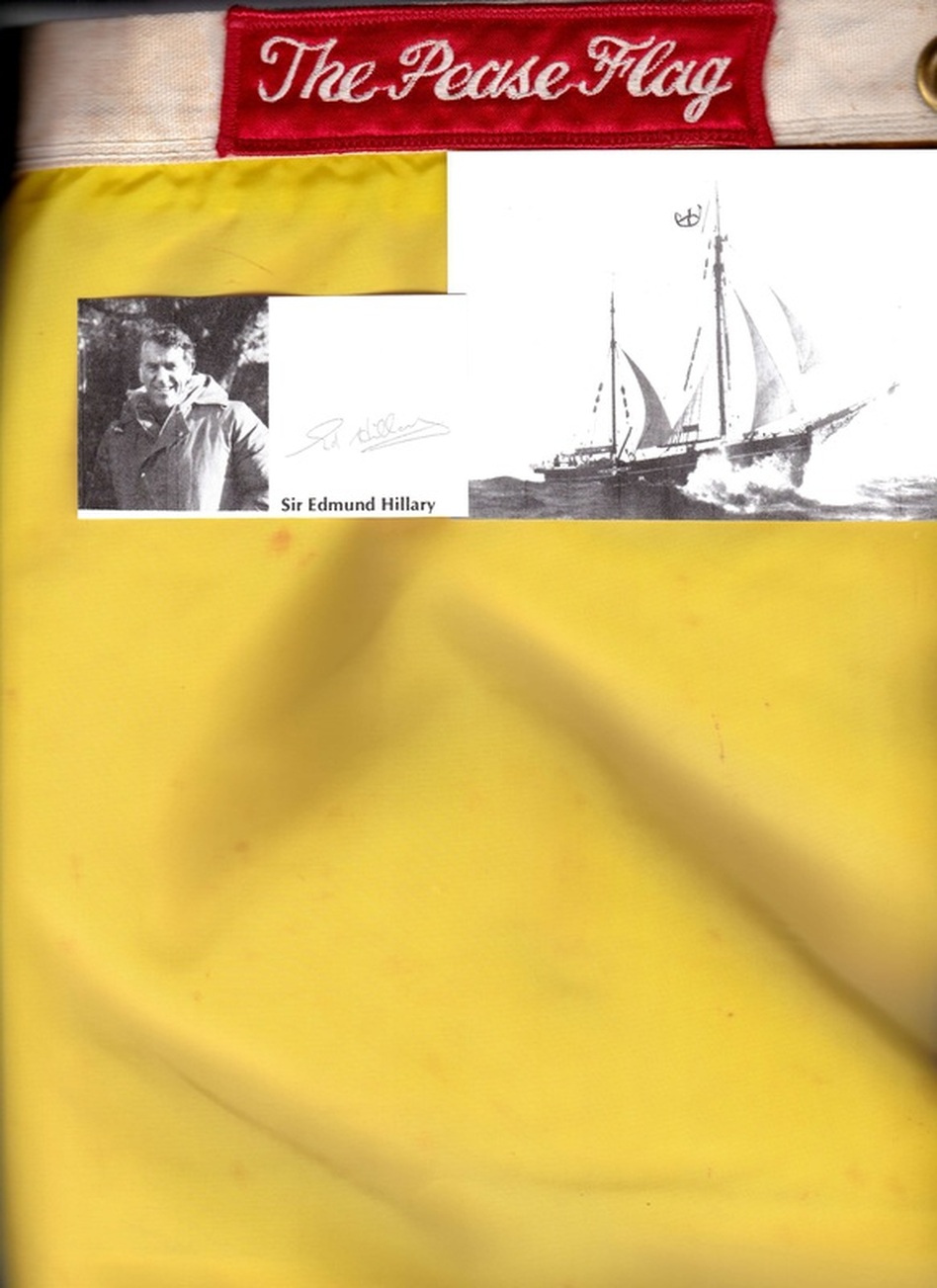 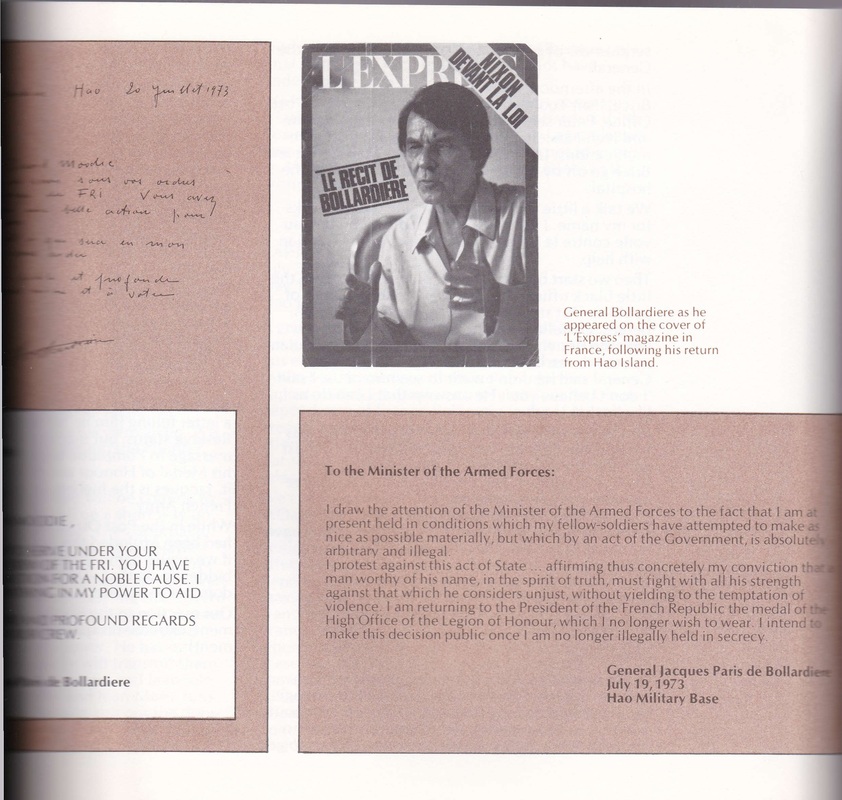 Briefly,  I made a flag for Peace (the first one to my knowledge) and gave it to a crew
member of a ship that was dry docked in Sausalito California that then used it to Protest
French Nuclear  Bomb Tests in Mururoa,  got arrested,  had the flag stolen,  and then
sailed  to New Zealand and wrote a book about it.

In the early 1970's I was very active in protesting against

the War in Vietnam and frequently when I attended rallies in

San Francisco the  American flag was being burned.   I understood

the anger that motivated people to do this but I thought

destroying the flag did not solve the problem,  and another

message was needed.  I graduated from George Washington University

and I asked myself,  "What would George do?"   I decided to make a

flag for Peace.   Prior to this time I never saw a Peace symbol

on a flag.    First,  I made them out of cotton,  but they quickly tore

apart in the wind,  and after awhile I decided to make a

"lasting peace" out of nylon,   a much stronger material.

There was a problem though,  and that was that they were very

expensive and not many people could afford them.

flag I saw in Stockholm some years earlier.

Here's what makes mine so special....

I was working in San Francisco  and would drive north over the Golden Gate
bridge and through Sausalito  a coastal town to Corte Madera where I lived at
the time.  One day I noticed a sailboat anchored in the Bay and I thought it
would be nice to see my flag flying from the top of their mast,  but I had no way
of approaching it.

them a flag.  I took my briefcase with flags and walked up the plank to their

deck but nobody was topside,   however a hatch was open so I called

out "Hello".   Slowly a man appeared from below deck.   I introduced myself and told

him I made Peace flags and asked if he would like to buy one?

He said, "We can't afford it."  I thought for a moment  and decided to give him

some Hula dancers which looked interesting so I continued watching,

I was intrigued.   Next,   a Military officer stepped out of the back of it in

describing that they were in Tahiti to witness a  French Nuclear Bomb Test.

Then the picture was at sea and there was a sailboat

thousands of sailboats."  Then the camera scanned up the mast  and there was my flag
flying at the top.   I couldn't believe it!  I was stunned  and I look back today
in amazement at what happened.

Just prior to this,  news of their planned voyage and Protest had spread to France

to Australia,  charter a boat to take him to the Bomb Test Zone,  and  join them.

He traveled thousands of miles and when he got to  the Bomb Test Zone he was
gratefully welcomed aboard the protest ship,  FRI.

When the French commandos boarded the ship to arrest everyone,  General Bollardiere did
a rare deed,  he returned  in Protest  to the French President,  the Medal of Legion of Honor that
he had been awarded.  He was pictured on the front cover  of L'EXPRESS  in France with the full
story of his journey and protest.  See a  photo of him above and the letter he wrote to the Minister
of the Armed Forces of France.

The French Navy Commandos then seized their ship,  stole their (my) flag and arrested the whole crew.

Several months after I saw this film on TV I  was visiting a friend in Bolinas,  a small town on the
coastline and on my way home I stopped to give a ride to someone who was hitch-hiking.
As I was driving on Route 1 I told him I was a painter and I asked him what he did and he said,
"I'm a filmmaker and I recently made a documentary about a ship that sailed near Tahiti in Protest
of the French Nuclear Bomb Tests."   I turned and looked at him in disbelief and exclaimed,
"I MADE THE FLAG THEY FLEW,   I SAW YOUR FILM ON TV"  It was incredible, our eyes
were glued together as he told me the story of how the crew was arrested, and then released and
sailed on to New Zealand and wrote a book about it.     He said, "It's at The Tides bookstore in Sausalito."
I took him to where he was going in the San Geronimo Valley,  and asked him his name,  Andy Clark,
but I did not ask him for a copy of his documentary film.  I am currently trying to find him.
I did find David Moodie, the Captain of the FRI,  and he's looking for the film Clark made.

I went to the bookstore and got their book, FRI ALERT,  and  on the CONTENTS page is a photo
(the only one) of my flag  being hoisted up the mast,  and  on the Forward page is a photo of Sir
Edmund Hillary with a big smile and the statement,   "I cannot help but admire their spirit."

Wikipedia reports,  ". . . Fri was an important part of a series of anti-nuclear protest campaigns
out of New Zealand which lasted thirty years, from which New Zealand declared itself a
nuclear-free zone which was enshrined in legislation in what became the
New Zealand Nuclear Free Zone, Disarmament, and Arms Control Act 1987.[2][3]
In 1974, coordinated by Greenpeace New Zealand, the Fri embarked on a 3 year epic
40,233 kilometers “Pacific Peace Odyssey” voyage, carrying the peace message to all
nuclear states around the world.[4]"
https://en.wikipedia.org/wiki/Fri_%28yacht%29

Here is a link to a video made by Alistair Barry one of the crew members of the FRI:
http://www.mururoavets.org.nz/index.php/photo-galleries/video-gallery/viewvideo/7/mururoa-trip-videos/mururoa-1973-trailer-vanguard-films-nz.html  (please copy & paste into your browser)

Here is a time lapse video of all the Nuclear Bomb Explosions between 1945 and 1998
made by Isao  Hashimoto:   http://www.youtube.com/watch?v=LLCF7vPanrY
(please copy & paste into your browser)

Perspective From The Distant Past

It is generally thought that our combined human scientific knowledge today is the ultimate
and most advanced  to ever exist on our planet.  However,  the  eclectic scholar and linguist,
Charles Berlitz  author of, The Bermuda Triangle,  raised a serious question in  this regard
in one of his books titled:  The World of the Incredible But True.  As the title suggests
he reports some of the most unbelievable stories one can imagine.   The last story is especially
poignant :   Prehistoric Atomic Warfare.  In it he describes that at the very moment  of the detonation
of "the first" Atomic Bomb at White Sands New  Mexico in 1945  J.  Robert Oppenheimer quoted a
passage from the ancient Indian book the Mahabharata :

"If the radiance of a thousand suns were to burst at once in the sky,
That would be like the splendor of the Mighty One.
I am become Death, the destroyer of worlds."

"The Mausala Parva, a section of the Mahabharata,  has more to say about the effects
of the Iron Thunderbolt,  particularly reminiscent of Nuclear Bombs:"

". . .  it was a single projectile charged with all the power of the Universe.
an incandescent column of smoke and flame,
as bright as ten thousand suns,
rose in all its splendor . . .
it was an unknown weapon,  an iron thunderbolt,
a gigantic messenger of death
which reduced to ashes the entire race
of the Vrishnis and the Andhakas.
. . .  the corpses were so burned
as to be unrecognizable
Their hair and nails fell out . . .
Pottery broke without apparent cause
and the birds turned white."

"Were these strange parallels to our own experience merely
an example of ancient 'science fiction' or were they accounts
of real events that destroyed a civilization thousands of years
before our own developed?"

Adding more credibility to Berlitz's  story is the report from
Archaeologists that at Mohenjo Daro,  in what is now Pakistan,
ruins have been found that have at their base a layer of green fused
glass such as what is  found at the sites of Nuclear Bomb blasts.  Bodies were
found there in a street where  the people appear to have died instantly in some
cases holding hands.

The nuclear arsenals of the world today could destroy the world many times over,
making the need for Peace more essential today than ever before..

While the testing of Nuclear Bombs in the atmosphere may have stopped,  and the
use of Hydrogen and Neutron Bombs are a real danger,  another problem continues
to plague the world,  namely the use of  Nuclear Energy.  Since the unprecedented
catastrophe at Fukushima  the threat of Radiation has increased exponentially and
will continue to do so forever.    New clean ways of making electricity are being developed
and Dr. Hans Neiper in Germany wrote a pioneering  book on it titled,   Conversion Of
Gravity Field Energy,  REVOLUTION In Technology Medicine And Society that gave
respectability to the pursuit of novel ways of making electricity that require no fuel.
Meanwhile,  plans for building more nuclear power plants continues despite the unsolvable
problems of waste disposal.  and old plants leaking radiation into the environment.

Since the nuclear reactors at Fukushima melted down  in 2011 there has been
more awareness of the dangers of using nuclear fuels to make electricity and
the colors in my flag coincide with the colors being used in Japan at public gatherings.

See:   The Atomic States of America  http://www.youtube.com/watch?v=Snq5InfEdlg
that was selected by the Sundance Film Festival in 2012.

Foster Gamble,  the co-producer of THRIVE,  spoke recently at the  United We Stand Festival
in Los Angeles  and gave us a glimpse of a future with abundant safe energy:
https://www.youtube.com/watch?v=vsA6iDGgpQg

As you could hear there is real excitement about the prospect of these technologies becoming
available soon,  and simultaneously our pursuit of Peace continues.  My goal is to help unite many
diverse groups around the world who are striving to achieve a safer world free of leaking nuclear
reactors and bombs that assure mutual destruction.   Your help is needed to resurrect The Pease Flag.
I'm looking for distributors at all levels, radio and advertising experts, and everyone with a desire
to create a safer world.

Every flag will be delivered with a Certificate of Authenticity verifying that it was made
by the originator of the flag flown in protest of the French Nuclear Bomb Tests at Mururoa
in 1973.